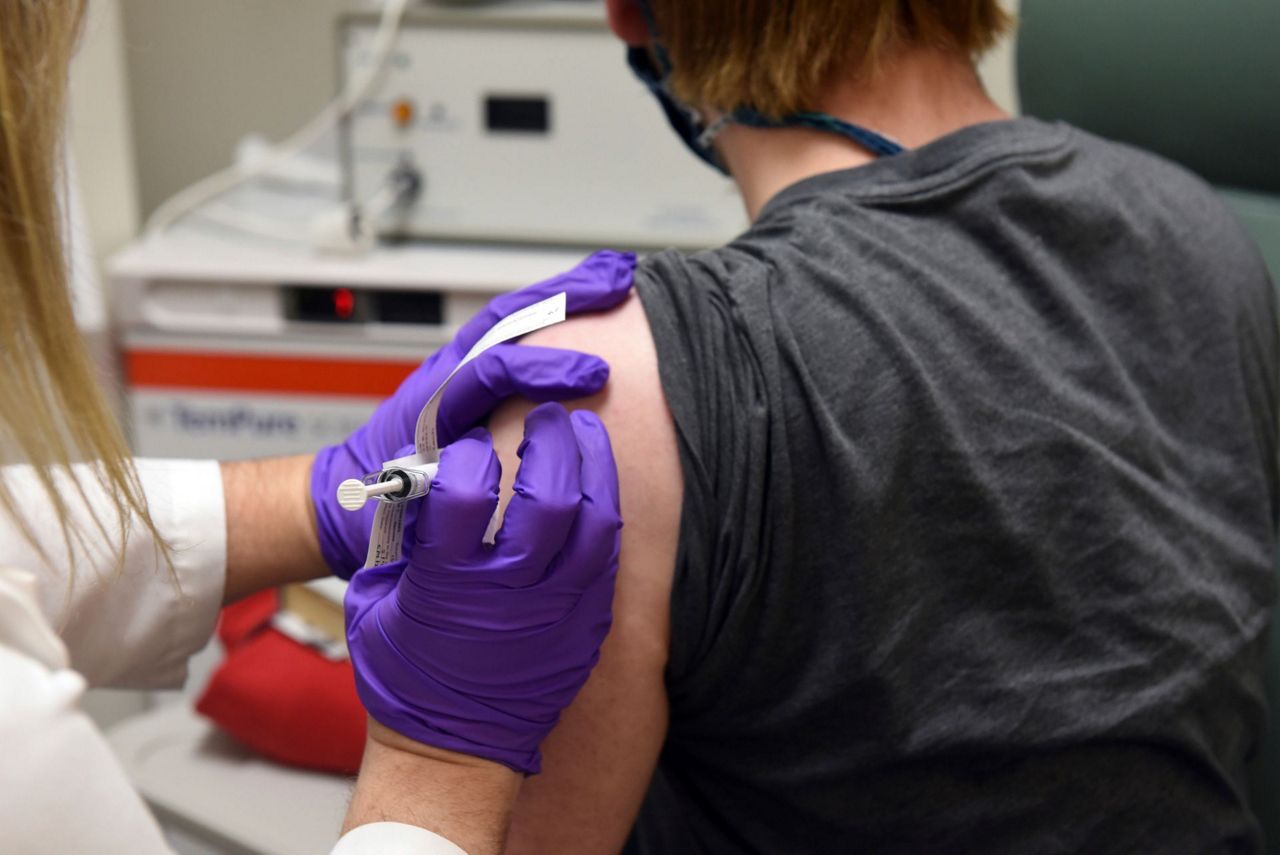 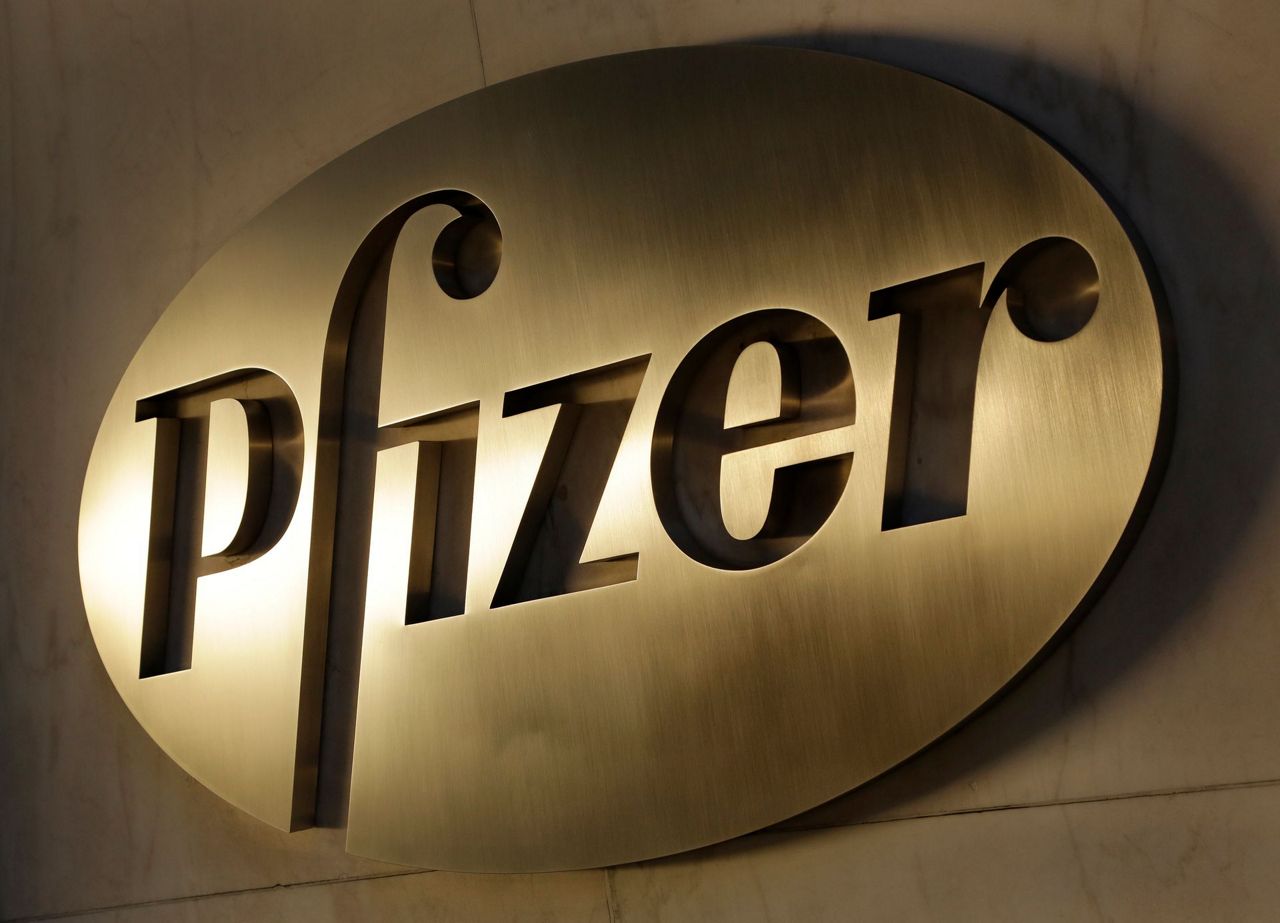 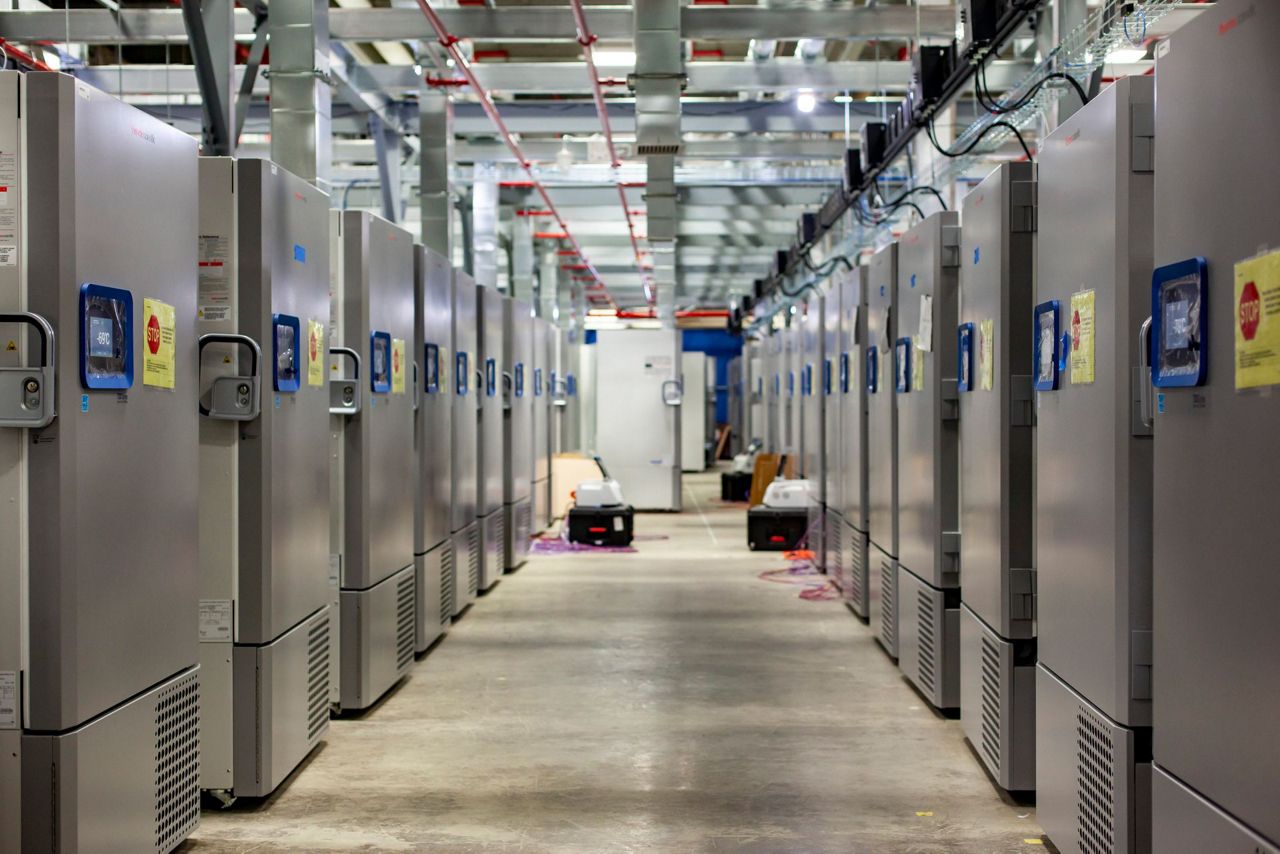 3 of 6
This October 2020 photo provided by Pfizer shows part of a "freezer farm," a football field-sized facility for storing finished COVID-19 vaccines, under construction in Kalamazoo, Mich. Pfizer’s experimental vaccine requires ultracold storage, at about -70°C, so as they are made, the vaccines are being stored in special freezers until the Food and Drug Administration approves use and the vaccines can be distributed. (Jeremy Davidson/Pfizer via AP) 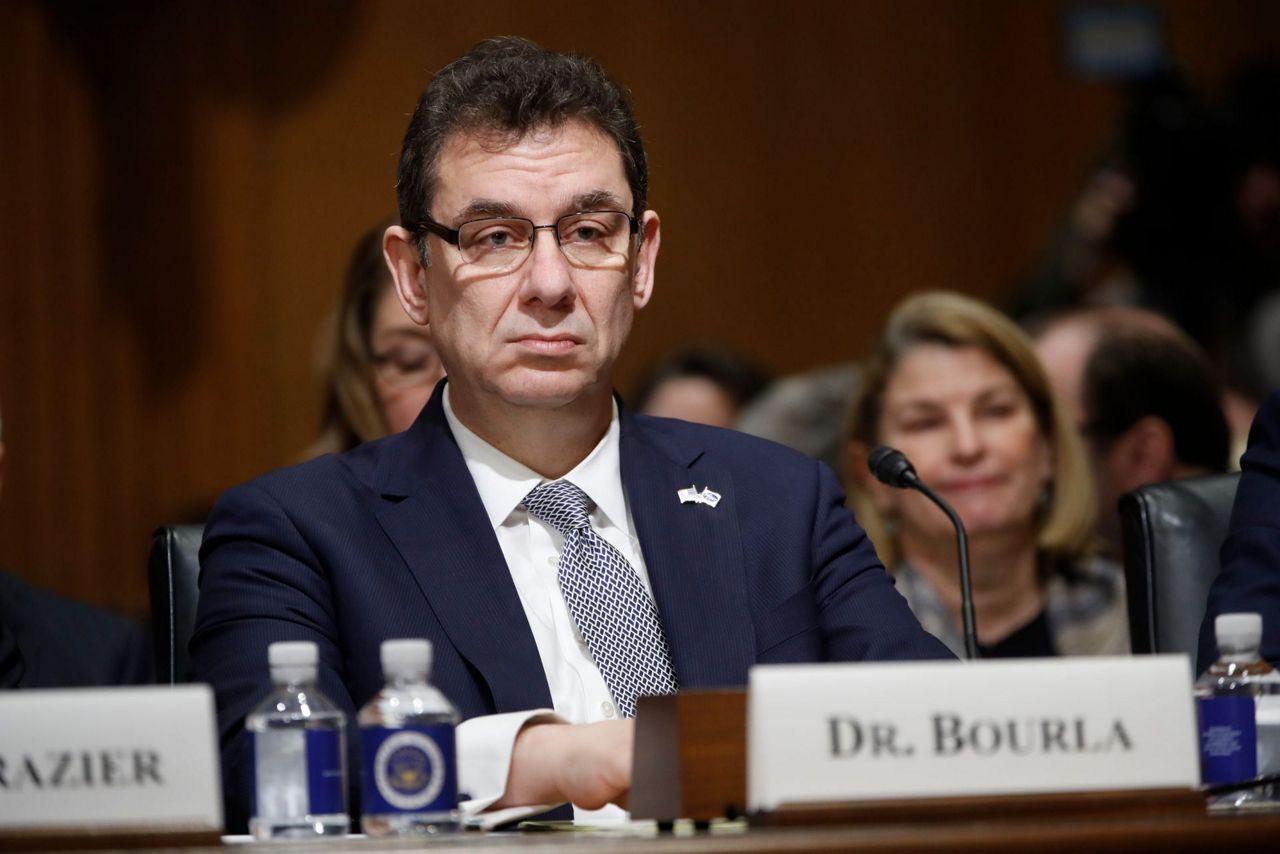 4 of 6
FILE - In this Feb. 26, 2019 file photo, Albert Bourla, chief executive officer of Pfizer, prepares to testify before the Senate Finance Committee hearing on drug prices, on Capitol Hill in Washington. On Monday, Nov. 9, 2020, Pfizer said that an early peek at the data on its coronavirus vaccine suggests the shots may be a surprisingly robust 90% effective at preventing COVID-19, putting the company on track to apply later this month for emergency-use approval from the Food and Drug Administration. (AP Photo/Pablo Martinez Monsivais, File) 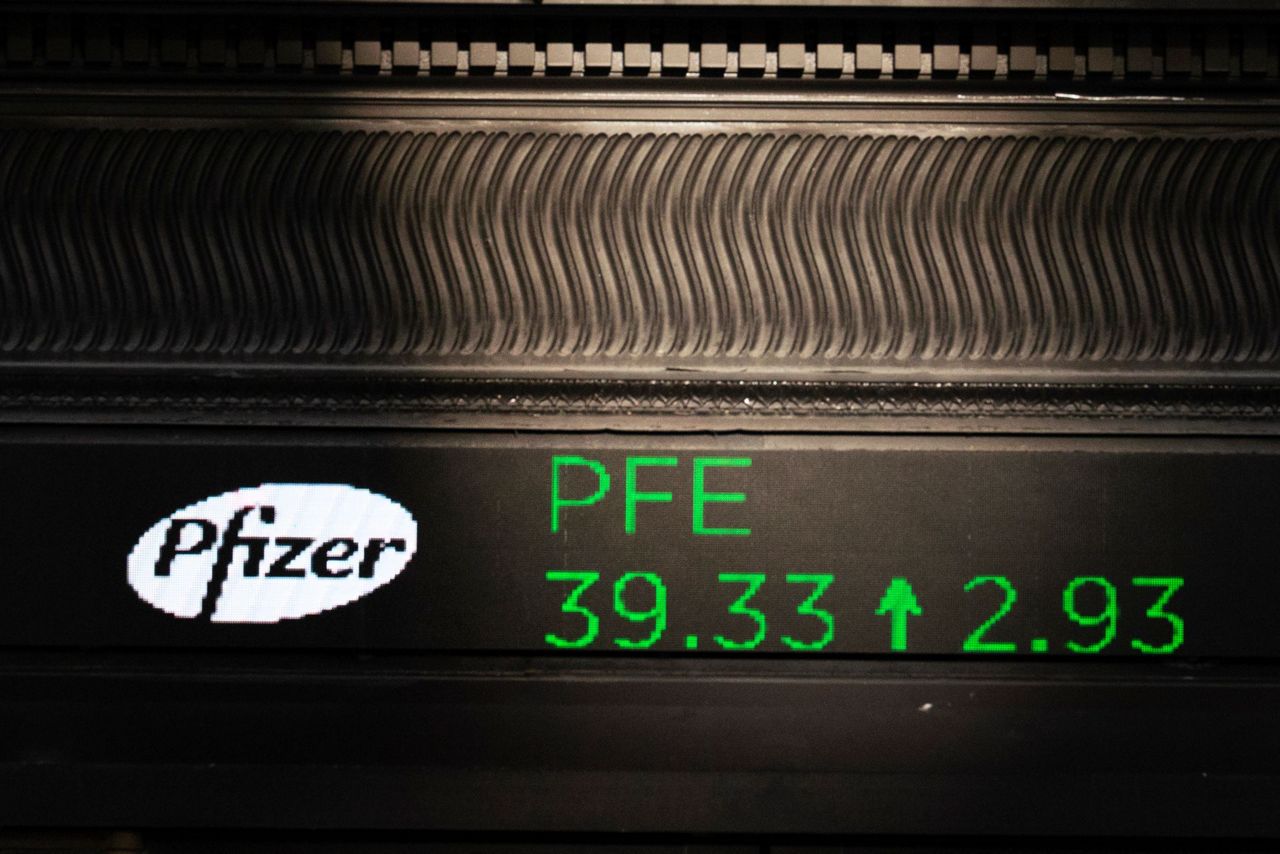 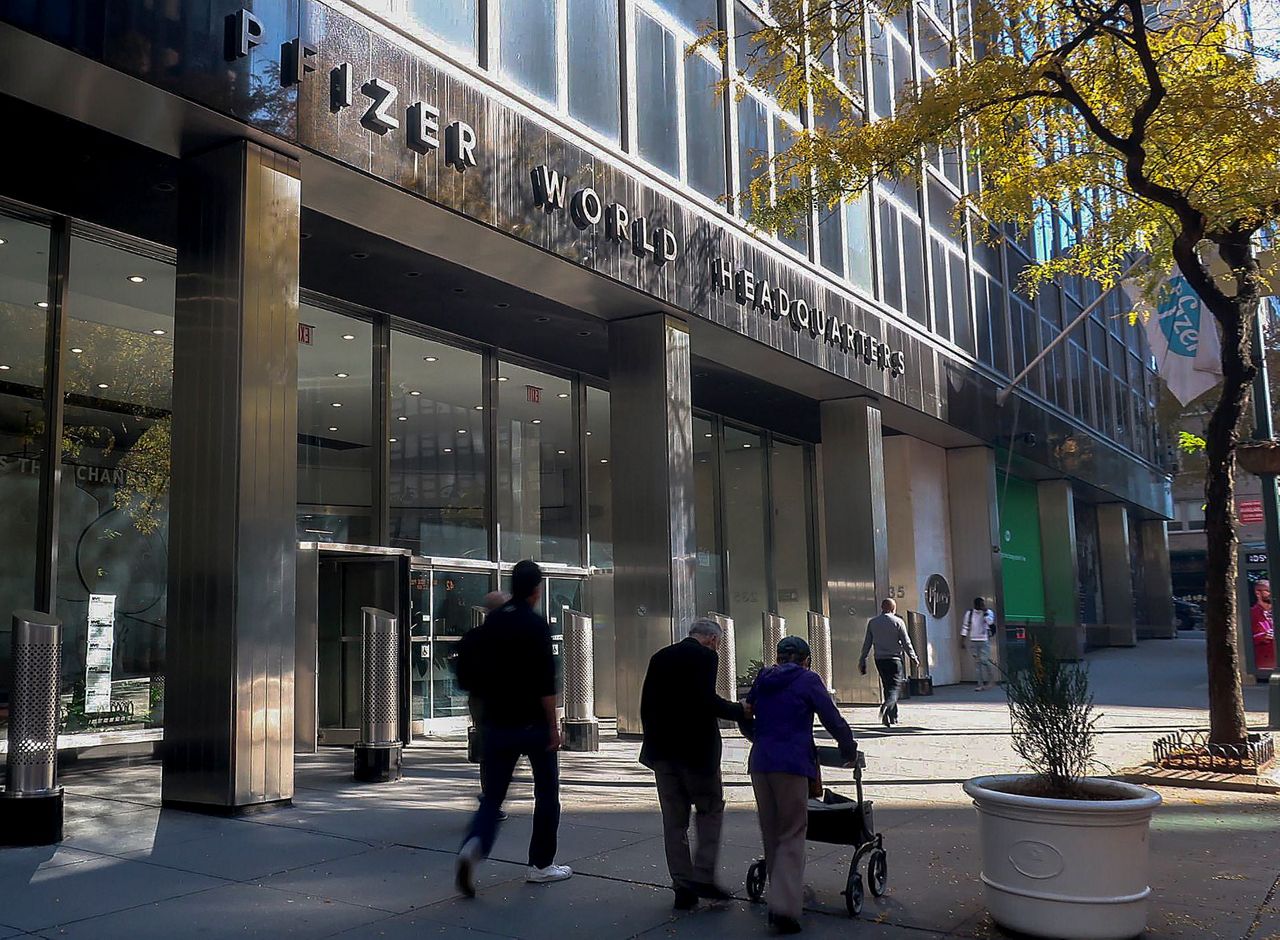 6 of 6
Pedestrians pass by the Pfizer world headquarters, Monday, Nov. 9, 2020, in New York. Pfizer said Monday that an early peek at the data on its coronavirus vaccine suggests the shots may be a surprisingly robust 90% effective at preventing COVID-19, putting the company on track to apply later this month for emergency-use approval from the Food and Drug Administration. (AP Photo/ Ted Shaffrey)

Pfizer said Monday that early results from its coronavirus vaccine suggest the shots may be a surprisingly robust 90% effective at preventing COVID-19, putting the company on track to apply later this month for emergency-use approval from the Food and Drug Administration.

The announcement, less than a week after an election seen as a referendum on President Donald Trump's handling of the crisis, was a rare and major piece of encouraging news lately in the battle against the scourge that has killed more than 1.2 million people worldwide, including almost a quarter-million in the United States alone.

Dr. Anthony Fauci, the U.S. government's top-infectious disease expert, said the results suggesting 90% effectiveness are “just extraordinary," adding: "Not very many people expected it would be as high as that.”

“It’s going to have a major impact on everything we do with respect to COVID,” Fauci said as Pfizer appeared to take the lead in the all-out global race by pharmaceutical companies and various countries to develop a well-tested vaccine against the virus.

Dr. Bruce Aylward, the World Health Organization’s senior adviser, said that Pfizer's vaccine could “fundamentally change the direction of this crisis” by March, when the U.N. agency hopes to start vaccinating high-risk groups.

Still, Monday's announcement doesn't mean for certain that a vaccine is imminent: This interim analysis, from an independent data monitoring board, looked at 94 infections recorded so far in a study that has enrolled nearly 44,000 people in the U.S. and five other countries. Some participants got the vaccine, while others got dummy shots.

Pfizer Inc. cautioned that the protection rate might change by the time the study ends. Even revealing such early data is highly unusual.

Dr. Jesse Goodman of Georgetown University, former chief of the FDA’s vaccine division, called the partial results “extremely promising” but ticked off many questions still to be answered, including how long the vaccine’s effects last and whether it protects older people as well as younger ones.

Also, whenever a vaccine does arrive, initial supplies will be scarce and rationed, with priority likely to be given to health care workers and others on the front lines. Pfizer has estimated that 50 million doses of its two-shot vaccine could be available globally by the end of 2020, which could cover 25 million people.

Global markets, already buoyed by the victory of President-elect Joe Biden, exploded on the news from Pfizer. The S%P 500 surged 3.7% after the opening bell, and the Dow Jones Industrial Average was up more than 1,300 points. Pfizer jumped more than 9%. Other vaccine stocks were up as well.

Trump, who had suggested repeatedly during the presidential campaign that a vaccine could be ready by Election Day, tweeted: “STOCK MARKET UP BIG, VACCINE COMING SOON. REPORT 90% EFFECTIVE. SUCH GREAT NEWS!”

Biden, for his part, welcomed the news but cautioned that it could be many months before vaccinations become widespread in the U.S., and he warned Americans to rely on masks and social distancing in the meantime.

News of the possible breakthrough came ahead of what could be a terrible winter in the U.S., with tens of thousands more coronavirus deaths feared in the coming months. Confirmed infections in the United States were expected to eclipse 10 million on Monday, the highest in the world. Cases are running at all-time highs of more than 100,000 per day.

The timing of Pfizer's announcement is likely to feed unsubstantiated suspicions from Trump supporters that the pharmaceutical industry was withholding the news until after the election. Donald Trump Jr. tweeted: “The timing of this is pretty amazing. Nothing nefarious about the timing of this at all right?”

Pfizer Chairman and CEO Albert Bourla said on CNBC that the election was always an artificial deadline and that the data was going to be ready when it was ready. The independent data monitors met on Sunday, analyzing the COVID-19 test results so far and notifying Pfizer.

“I am very happy," Bourla said, "but at the same time, sometimes I have tears in my eyes when I realize that this is the end of nine months, day-and-night work of so many people and how many people, billions, invested hopes on this.”

Scientists have warned for months that any COVID-19 shot may be only as good as flu vaccines, which are about 50% effective and require yearly immunizations. Earlier this year, Fauci said he would be happy with a COVID-19 vaccine that was 60% effective.

Pfizer opted not to join the Trump administration’s Operation Warp Speed, which helped a half-dozen drugmakers accelerate their vaccine testing and helped fund the work. Instead, Pfizer funded all its testing and manufacturing costs itself. The company said it has invested billions of dollars.

The president's boasts that a vaccine could be ready before Election Day raised fears that the Trump administration might pressure regulators and scientists to cut corners for political gain. After the first presidential debate, Bourla told his employees he was disappointed their work was being dragged into political debates and pledged the company was “moving at the speed of science.”

The shots, made by Pfizer and its German partner BioNTech, are among 10 possible vaccine candidates in late-stage testing around the world — four of them so far in huge studies in the U.S. Another U.S. company, Moderna Inc., also hopes to file an application with the FDA this month.

Volunteers in the final-stage studies, and the researchers, don't know who received the real vaccine or a dummy shot. But a week after their second dose, Pfizer's study began counting the number who developed COVID-19 symptoms and were confirmed to have the coronavirus.

Because the Pfizer study hasn't ended, Gruber couldn't say how many in each group had infections. But the math suggests that almost all the infections counted so far had to have occurred in people who got the dummy shots.

Pfizer doesn’t plan to stop its study until it records 164 infections among all the volunteers, a number that the FDA has agreed is enough to tell how well the vaccine is working. The agency has made clear that any vaccine must be at least 50% effective.

No participant so far has become severely ill, Gruber said. He could not provide a breakdown of how many of the infections had occurred in older people, who are at highest risk from COVID-19.

Participants were tested only if they developed symptoms, leaving unanswered whether vaccinated people could get infected but show no symptoms and unknowingly spread the virus.

Fauci said that the Pfizer vaccine and virtually all others in testing target the spike protein the coronavirus uses to infect cells, so the latest results validate that approach.

Public Citizen, the consumer advocacy group, called the release of the preliminary and incomplete data “bad science" and said that any enthusiasm over the results “must be tempered” until they are reviewed by the FDA and its independent experts.

“Crucial information absent from the companies’ announcement is any evidence that the vaccine prevents serious COVID-19 cases or reduces hospitalizations and deaths due to the disease," the organization said.

FDA has told companies they must track half their participants for side effects for at least two months, the period when problems typically crop up. Pfizer expects to reach that milestone later this month.

Because the pandemic is still raging, manufacturers hope to get permission from governments around the world for emergency use of their vaccines while additional testing continues. That would allow them to get their vaccines to market faster, but it also raises safety concerns.

The Associated Press Health and Science Department receives support from the Howard Hughes Medical Institute’s Department of Science Education. The AP is solely responsible for all content.

Copyright 2020 The Associated Press. All rights reserved. This material may not be published, broadcast, rewritten or redistributed without permission.