SAN MARCOS, Texas -- Tattoo artists in Texas are in limbo right now, wondering when their shops will be allowed to safely reopen.

"The fact that there aren't machines running is the weird thing. There's no buzz," said tattooer Mark Diehl. "Over the years, people are like, ‘The sound of the machine, does it bother you?’ And it's like, 'No. I barely even hear it anymore."

Diehl has been out of the job since St. Patrick’s Day when both his San Marcos and San Antonio shops he tattoos for closed up. No tattoos means 100 percent of his income is gone. He’s turned to drawing and painting famous musicians like Stevie Ray Vaughan, Ozzy Osbourne and Willie Nelson. 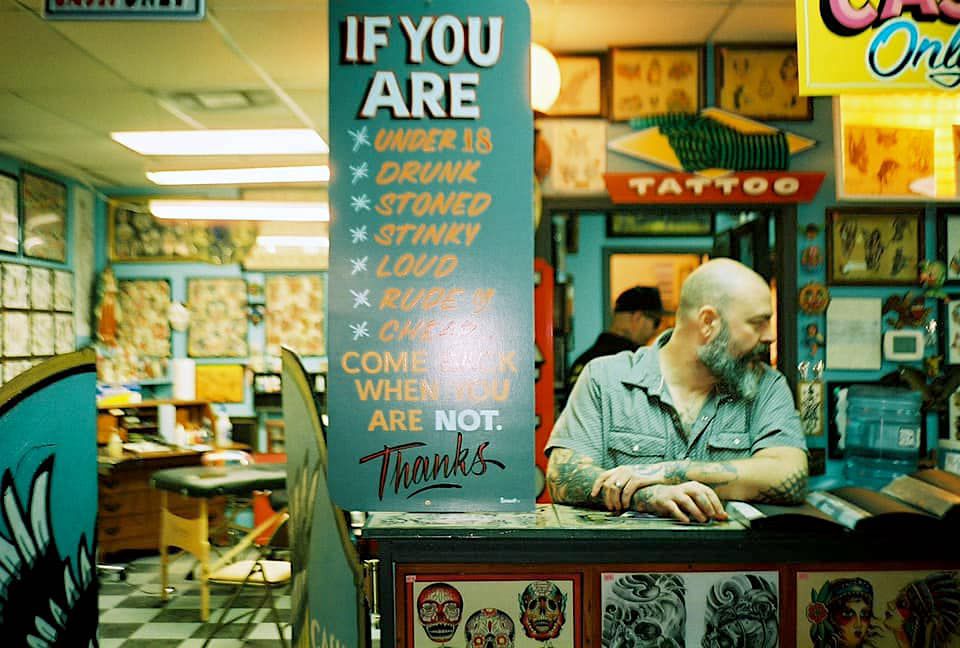 Tattoo artist Mark Diehl appears at a shop in this image from May 2020. (Courtesy: Mark Diehl)

When Texas Gov. Greg Abbott announced hair and nail salons and similar businesses could open back up, many tattooers thought their studios would be opening too, which wasn’t the case. The order explicitly states: "People shall avoid visiting bars, massage establishments, tattoo studios, piercing studios, sexually oriented businesses, or interactive amusement venues such as bowling alleys, video arcades, amusement parks, water parks, or splash pads, unless these enumerated establishments or venues are specifically added as a reopened service by proclamation or future executive order of the governor."

“I don't know why the reason is that tattooing has been kind of classified with like strip clubs and massage parlors," Diehl said. “I feel like it's more similar to a beauty salon. 'cause we don't have any stripper poles in here as you've seen, you know, nothing against strip clubs by any means. I mean that would be like comparing a bar to a tattoo shop because bars require crowds. Tattoo shops? It's a one on one, just an individual thing. Just a handful of extra precautions right now and tattoo shops would be one of the safest, if not the safest business to have open right now."

Diehl said it’s understandable why people may be apprehensive about stepping back into the studio, but he said tattooing was already a heavily regulated profession, and would be even more so during this pandemic.

“We would be adding a few extra steps outside of our normal routine of sterilization. And I feel like it would be one of the safest environments you could operate right now,” Diehl said. "Tattoo shops don't require crowds to make money. So you can limit the amount of people in a space. Everybody wears masks, you just do a little bit of extra disinfecting and work by appointment only so there's not people just coming in. It would be extremely safe, I believe.”

The majority of supplies artists use for tattooing are single use, minimizing the risk for cross contamination. Tattooers are also required to be bloodborne pathogen and cross contamination certified. The shops they work in also have to have a state license.

“The state has a certain set of regulations that you have to follow in order to have a license to operate a business like this. So, we're obviously following procedures. They have inspectors come out and check and make sure that everything's being followed," Diehl said. "Especially so you're not touching something that's dirty and then touching something that's clean, making it dirty. Just keeping keeping those things separate."

Diehl said once he's allowed to reopen, his business may raise the required minimum cost to further limit how many customers are in the shop daily.

“You know, so we don't have multiple people coming in and getting tattoos that take 10 minutes to do. You know, it just makes sense to keep less people coming through the door," Diehl said. "If you're running through all these precautions, it makes a lot more sense to have somebody sitting there for two hours as opposed to 10 minutes.”

The good news? There's not a shortage of clients waiting to make appointments to get some ink.

"There will probably be a pretty busy pop right off the bat because I'm sure people are itching to get their tattoo done," Diehl said.